2018 Christmas Parade
​   The Restigouche Multicultural Association staff members participated in the 2018 Christmas parade along with clients, exchange students from Roland Pépin high school, family and friends. Waving all their country flags to show strength in diversity and multiculturalism. 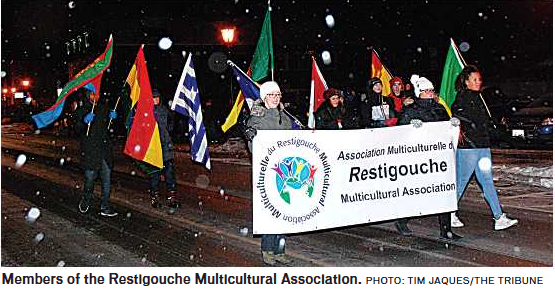 The Restigouche Multicultural Association participated to the Charlo Fallfair on September 8  through international dancing and signing by the students of CCNB. 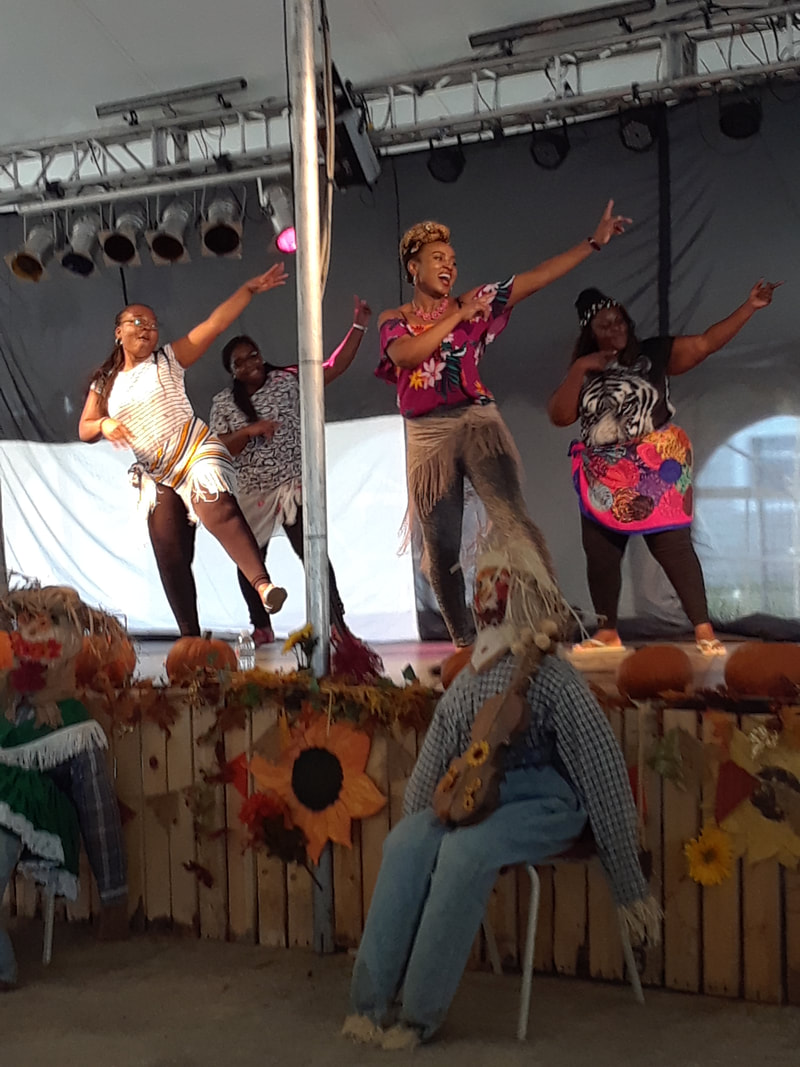 From Africa respectively, a belly dancing display by Marilyne Gelinas,  the Campbellton YMCA, the Société Culturelle de la Baie des Chaleurs the Campbellton Centennial Library, the Raymond-Lagacé Public Library and the Restigouche Multicultural Association. At 2:30 p.m., the North Shore Highland Dance Studio performed a few Scottish dances on stage at the Alma Hall, which was followed by cultural awareness given by Jabbar Lawani for the children present at the event. Coffee, tea and sweets were provided by Café Chez Wes for the afternoon, and a lemonade stand was set up by Sobeys.

Following these afternoon kiosks, multicultural food vendors sold their homemade dishes from around the world to attendees, including Belgian dishes by Erika Cantu, African dishes by Honorine Ngountchoup, Indian dishes by Manjusha Kumar, Middle Eastern dishes by May Nazair and Inuit dishes by Irene Ikinilik. Live entertainment starting at 6 p.m. included Samanta Levesque, Denis Michel Hache, a fashion show from Design From Africa, Sylvie Gallant, African dance crew Make Africa Proud, Jamie Scott Bernatchez and Colleen Doucette. After the first performer, a panel discussion took place on stage with Erika Cantu, Cecilia Natoli, Nicolas Bertrand and Awet Waldegebreal, who spoke about their experience as immigrants to give attendees some insight as to what an immigrant goes through while coming to and integrating themselves into Canada.

Overall the second annual Multicultural Block Party was a huge success, bringing in over 700 people throughout the day and showcasing many different cultures as well as promoting cultural awareness in our region. The Restigouche Multicultural Association would like to extend its deepest gratitude to the MC for the day Stacy Doiron, the sound technician Gary Fugère, the Association’s staff and Board, its sponsors and volunteers, which will be listed below, all the cooks, those in charge of kiosks, the panelists and finally all attendees for making this event possible. We hope to see you all at our future events.

The New Brunswick Multicultural Council held one of it's 15 sessions in Campbellton on May 2nd at the Memorial Civic Center. This very informative and interesting session was very well received with over 80 people attending and joining in this important conversation.  The New Conversations Tour is a chance to begin repositioning our regions for the future through a constructive dialogue around immigration, the economy, and the vitality and sustainability of our communities.

The evening started with NBMC's MC, Pascale Paulin, introducing the Mayor of Campbellton, Stephanie Anglehart-Paulin who welcomed all of the attendees.  Richard Saillant, Moncton-based economist, author and former vice-president of the University of New Brunswick, presented pertinent new economic and demographic research about our region.  The audience was invited to ask questions and get the conversation going.

Five panelists spoke about their experiences as employers and newcomers to our region. They shared their interesting stories about integration into the workplace and the community.  The panelists included; Sylvain Lebel, Suzanne Beaudoin, May Nazair, Eva Fischer and Romeo Fogho Mboulemo.

Attendees participated in constructive dialogue around immigration, the economy and the vitality and sustainability of our communities. Some great ideas were shared and presented.

On February 23rd, The Restigouche Multicultural Association in collaboration with CCNB-Campbellton Campus and the Department of Post-secondary Education, Training and Labour, celebrated Black History Month by hosting an evening at the Alma Hall in Atholville. Over 200 people enjoyed the evening which included;  Key speakers included:
Also present were dignitaries from Atholville, Campbellton, Charlo and Dalhousie, as well as Carolle LeBlanc who represented MP Rene Arseneault.

This beautiful evening ended with the energetic group AFroViBES from Quebec who entertained the crowd with their amazing music.

Comments from the evening:
"Beautiful evening-Bravo to the organizers. I learned alot regarding the students that are with us here in N.B."
"Thank you for introducing us to new cultures"
"A fascinating and energetic evening!"
"Lovely and so classy; very much appreciated!"

The Government of Canada and the Senate marked the 150th anniversary of Confederation with a year-long celebration from coast to coast to coast by giving limited edition Sesquicentennial Pins to recognize local community members who have demonstrated exceptional leadership and have made significant contributions to our communities through volunteerism.
Adding to the prestige of this award, these pins were made from recycled sheets of copper that formerly rested on the roof of Canada’s Parliament.

On February 20th, Federal MP for Madawaska-Restigouche Rene Arseneault presented 10 of these Canada 150 pins in Balmoral for Restigouche County. Several categories were identified by the MP and the selection of recipients was made by the Restigouche Regional Services Commission.

​   Melindria Tavoularis, President of the Restigouche Multicultural Association in Campbellton, was one of the recipients of this Sesquicentennial Pin for the “Immigrants” category. Through her volunteering commitment, she has made a significant contribution to the economic and social development in our community. We are very proud of our President Melindria!

Over a series of 2-3 day weekend retreats, Imagine NB Youth Delegates will come together to take their unique and diverse leadership to the next level!

The goals of this program are as follows:
The program’s 28-Youth cohort explored the topic of Mental Health and met with leaders in Northern New Brunswick, such as Frederic Daigle, local business owner and councillor for the city of Campbellton, Melindria Tavoularis, President of the Restigouche Multicultural Association and the Honorable Gilles LePage, Minister of Labour, Employment and Population Growth.

“Population growth is one of the pillars of New Brunswick’s economic growth strategy”, said Minister of Labour, Employment and Population Growth, Gilles LePage. “Integration plays a large role in the retention of newcomers and their families who settle in our province. I commend the New Brunswick Multicultural Council and the Imagine NB coordinators for developing programming that will help newcomer youth become more deeply engaged and invested in their communities.”

Some of the delegates were visiting Campbellton for the first time. “Fostering community connections begins with learning about the regional history and the uniqueness that makes New Brunswick a great province. We are very excited to have the opportunity to expose the youth to the community of Campbellton on this retreat,” said the President of NBMC, Mike Timani.

“Every retreat focuses on a skill development,” says Executive Director, Alex LeBlanc. “On this retreat, Imagine NB delegates will sharpen their self-awareness and well-being skills, and learn why these areas are critical to leadership development.”
​
The Restigouche Multicultural Association attended the Meet & Greet which was held at the Quality Inn and also a dinner with the 28 youth delegates and 8 chaperones at the Restigouche River Experience Center. Everyone involved had a wonderful evening!

You tube video of the highlights:
youtu.be/5bYyLkleMbI

Frederic Daigle, councillor for the city of Campbellton, was our MC for the evening.
Two new Board members were elected: Mehmet Arzaz and Melvin Ferguson.